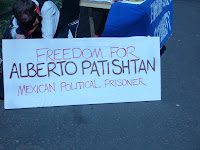 Over the last few days protests, letters and phone calls have been made to the government of Mexico by people from many parts of the United Kingdom calling for the immediate release of the iconic indigenous political prisoner and human rights defender Alberto Patishtán Gómez, who has now served nearly thirteen years of a sixty year sentence for a crime he did not commit.
Today a letter was presented at the Mexican Embassy in London, demanding that the courts act in accordance with justice and free the Tzotzil teacher, who has worked throughout his time in prison in support of other innocent indigenous prisoners. The letter was from The UK Zapatista Solidarity Network, which represents groups and individuals from many parts of the British Isles, who have already been busy writing to the courts in Mexico, where a motion for the recognition of Patishtán’s innocence will soon be considered.

At the same time, Edinburgh Chiapas Solidarity Group held a stall in central Edinburgh to inform local people of the situation of Alberto Patishtán. Around half a dozen group members distributed hundreds of leaflets to passers-by, urging support for Alberto and asking people to sign the online petition. A banner declaring FREEDOM FOR ALBERTO PATISHTAN - MEXICAN POLITICAL PRISONER was displayed. Members of the public stopped to discuss the issue as the stall continued for over three hours in the spring sunshine. The stall also distributed material on the Zapatista struggle for autonomy and packets of Zapatista coffee.

Protests have been taking place all over the world today, Patishtán’s 42nd birthday. The upcoming court hearing represents his last chance of freedom; otherwise he will spend the next 48 years in prison, unjustly accused of crimes he did not commit. Unfortunately it is common in Chiapas for indigenous people to be tortured and imprisoned unjustly on fabricated evidence after rigged trials. Patishtán, who was a community organiser who struggled for the rights of his people before his arrest, has suffered numerous violations of his human and legal rights during the period of his imprisonment. Many witnesses testify that he was elsewhere when the crime, an ambush in which seven police were killed, was committed, and those responsible remain unpunished.
Calling for the immediate freedom of Alberto Patishtán today, a representative of the UK Network said “His only crime was to struggle for liberty, justice and dignity for the poor and indigenous”.